The Agenda Group’s Seamus Bradley is a finalist in Australia’s top awards for digital and print publishers.

RoyalAuto, which Seamus edits for the Royal Automobile Club of Victoria, is a finalist in seven Australian national 2017 Publish Awards for excellence in publishing, the most for any single title.

RoyalAuto, which appears in digital and print, is a finalist for: 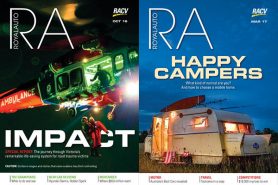 RoyalAuto is up against all the established media players (News Corporation, Fairfax, Pacific Magazines, Qantas) as well as new media companies such as Junkee, Buzzfeed and other dedicated digital publishers.

Pacific Magazines, which produces 15 magazine titles, has 13 finalists for magazines such as Marie Claire, InStyle and Better Homes and Gardens. The News Corporation-backed, Sydney-based Medium Rare Content Agency – which produces content for some of Australia’s biggest corporations – was nominated in nine categories.

Seamus, who is a former Associate Editor of The Sunday Age, News Editor at The Age, Guardian Australia contributor and Herald Sun journalist said: “It is an exciting privilege to be competing with some of the biggest players in digital and print media in Australia and a testament to the quality of work that can be produced by a small dedicated team of professionals.”

The RoyalAuto team won the Melbourne Press Club TAC Quill Award for excellence in journalism on the issue of road safety in March this year. RoyalAuto’s Quill win marked the first time one of Australia’s auto club magazines had taken out a major journalism prize.

The award-winning multi-media project is below, and can also be found at: racv.com.au/impact